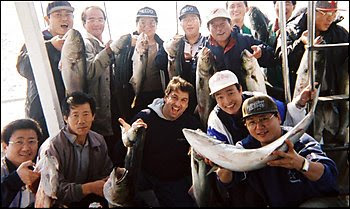 A bunch of South Koreans and an American gone fishing? You won't be able to tell otherwise, but these Koreans are actually the staff members of the North Korean Mission to the UN in New York City. So why are they fishing and fraternizing with an American?

The Washington Post carried an interesting story of Bobby Egan, a restauranter in New Jersey, who has befriended North Koreans (who are his regular customers), and in the process, has pursued a unique citizen diplomacy that helped bridge the gap and defuse tensions between the two otherwise hostile nations.

During the current uncertainties surrounding the success of the negotiated settlement outlined in the six-party process, this is an encouraging story that can remind the diplomats to find a resolution. By the way, the State Department must be somewhat serious about possibilities of US-DPRK normalization, as it loosened travel restrictions on North Korea's UN diplomats (restricted to immediate vicinity of NYC due to the lack of official US recognition of DPRK) to go fishing! How about a hunting trip next time?