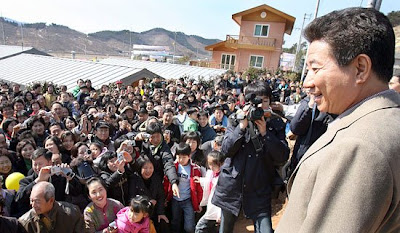 Former president Roh Moo-hyun's popularity seems to be bouncing back, judging from flux of tourists to his home town where he has retired to. This may reinforce his populist image that had helped him win the presidency initially, but his rocky administration had brought about a strong conservative backlash in South Korea, with a conservative successor president and a conservative-dominated national assembly that came into being after the April 9 parliamentary elections. The liberal and progressive camps are in disarray and fractured, and the younger generations are apathetic, as the lowest voter turnout in the recent election had shown. Moreover, the future of inter-Korea rapproachement is in jeopardy as both sides of Korea are reverting back to confrontational stances. Perhaps Roh should come out of his isolation in the countryside and attempt to make mends.