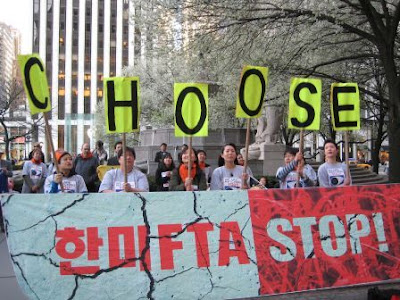 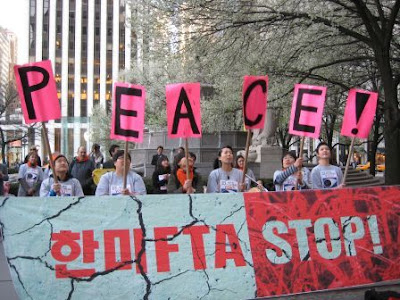 Looks like Lee Myung-bak chose a wrong time to visit the US, as his first official overseas visit as South Korea's new president was sidelined by simultaneous visits by the Pope and the Prime Minister of Britain to Washington, DC. He preaches the importance of strengthening the ROK-US alliance, but most Americans would be clueless about his visit, even if he came at another time, as there are no major US media coverage of his visit (unless you happen to spot a paid ad by Samsung on the business section of today's The Washington Post). His visit did draw protests opposed to his policies. Below is a news release from NYC. -- KR
Korean Americans to Lee Myung-bak: “No FTA!” “No Missile Defense!”
Protesters Greet South Korean President on U.S. Tour
New York City, April 15, 2008 – Chanting “Down down FTA” and “Missile defense makes no sense,” Korean Americans held a peaceful demonstration outside the Plaza Hotel where newly elected South Korean President Lee Myung-bak addressed an audience of diplomats and businessmen on his first official U.S. tour. Carrying signs and colorful banners, Korean Americans gathered to express their concerns about President Lee’s policies – his push to pass the Korea-U.S. Free Trade Agreement (FTA), and his support of constructing a missile defense system in South Korea.
“The FTA will not only wipe out Korea’s farmers, it will also lay off U.S. auto workers,” said Haeng-woo Lee, one of the participants of the rally, “It’s a lose-lose proposition for the common people of both countries.” The Korea-U.S. FTA, signed in June last year, await legislative ratification in both countries, and has been heavily criticized by citizens and lawmakers of both countries for its projected negative impact on workers and small farmers. Elimination of Korea’s tariffs on U.S. agricultural products, loosening of Korea’s health inspection standards on low-grade U.S. beef imports, and lifting of U.S. tariffs on South Korean auto are few of the most contentious issues included in the Korea-U.S. FTA. Korea’s former Presidential Secretary for Economic Policies Jung Tae-in has called the FTA a “grave blunder” that could hurt the South Korean economy and cause a crisis “ten times severer than the financial crisis it experienced in 1997.”
In a statement on U.S. policy on Korea, Senator Barack Obama, leading Democratic presidential contender, said he believes trade agreements should “pay proper attention to [both countries’] key industries and agricultural sectors, such as autos, rice, and beef, and to protection of labor and environmental standards,” and added, “Regrettably, the U.S.-Korea FTA does not meet this standard.”
According to Haeng-woo Lee, Korean Americans are also concerned about Lee Myung-bak’s willingness to cooperate with the U.S. in constructing a missile defense system in South Korea. “It will undermine a decade of progress we have made towards peaceful reunification [with North Korea] and throw us back into regional instability,” he said, “Not to mention that it will cost the Korean citizens a fortune.”
Past presidents in South Korea have been cautious about the idea of participating in the U.S. global missile defense initiative, vehemently opposed by lawmakers and civic groups alike. In a reversal of long-standing policy, however, Lee Myung-bak has expressed willingness to cooperate with the system and is expected to discuss the issue at the upcoming summit with George Bush at Camp David. Among the proposals being considered by Lee’s administration are providing missile launch sites to the U.S. military, joining the United States in developing ballistic missile defense (BMD) programs, sharing the cost of deploying the BMD system in South Korea and purchasing advanced U.S. missile defense systems, such as PAC-3s.
The South Korean government’s investment in new weapons systems and offensive capabilities will fuel a regional arms race that undercuts all talk of peace in Northeast Asia, says Rev. Keun-soo Hong of Solidarity for Peace and Reunification in Korea, an organization based in South Korea. “Northeast Asia is where four of the world's largest militaries -- US, China, Russia, and Japan -- confront each other. De-escalation is the only sensible path for South Korea,” he said. His group advocates the signing of a peace treaty to officially end the Korean War. Lee Myung-bak is headed to Camp David to meet with George Bush on April 18. Korean American groups say they will continue to raise their opposition to the FTA and missile defense.
Contact: Juyeon Rhee, juyeon.jc@gmail.com