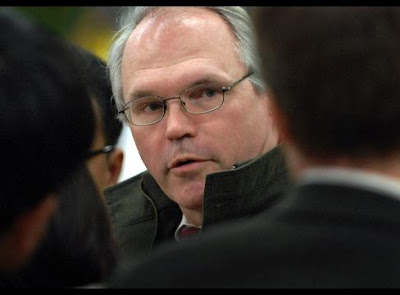 While Washington and Pyongyang try to hammer out a breakthrough from the latest snag in the implementation of the six-party nuclear disarment/normalization process in Geneva, the allegation of an uranium enrichment program in North Korea is on the spotlight, but the following report suggests a room for doubt:

"In a little-noticed speech at Amherst College on Jan. 30, [chief US negotiator Christopher] Hill [photo] said that U.S. officials had largely concluded that thousands of aluminum tubes acquired by North Korea in 2002 -- which sparked the intelligence finding that Pyongyang was building a large-scale uranium-enrichment program -- were not currently being used to create fissile material."

I would think so. I would expect to settle impasse in Six-Party Process in this year. Between Christopher Hill and Kim Gae-Gwan's sayings we can suppose that they are getting a clue to the solution of the issue. Thanks.