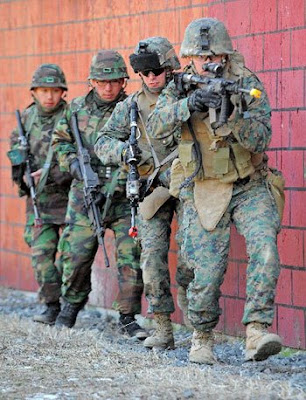 This photo of US soldiers leading South Korean soldiers in mock war exercises called Key Resolve/Foal Eagle, whch North Korea denounces as being provocative, may reflect the current combined command structure where the US maintains the commanding lead over ROK forces during wartime. But this will change in 2012, when the wartime command is scheduled to transfer back to the ROK forces, for the first time since the outbreak of the Korean War. Perhaps some exercises now in role reversal are in order, with ROK forces leading US forces?

If the newly-elected Pres. Lee Myung-bak has his way, South Korea may try to postpone the 2012 transfer indefinitely, despite the fact that the US commanders favored even earlier transfer in 2009. He wants to make South Korea the seventh largest economic power in the world, how will he be able to justify the lack of wartime operational control of that power's own military?

I think it's because wartime control and the entailing major investments in intelligence, C4I infrastructure, and the other niceties Americans have are expensive. And I think LMB is saving his Keynesian binge on that ridiculously huge canal or something