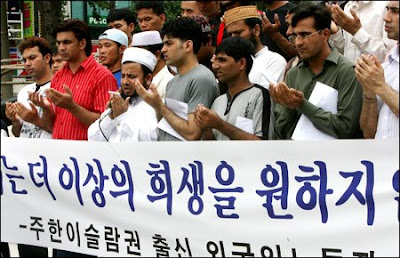 President Lee Myung-bak promises to elevate South Korea to more advanced economy and touts globalization, but it seems his administration will need to look into one of the dark sides of Korea's phenomenal growth: the discrimination and repression of foreign migrant workers in South Korea. Strong labor movement in South Korea has elevated the rights of Korean workers and labor unions, yet the plight of foreign migrant workers is often neglected. This issue would need to be addressed if South Korea wants to become one of the top global economic leaders.

Wol-san Liem of the Seoul-Gyeonggi-Incheon Migrants’ Trade Union presents an overview of the issue and the struggle.

[Photo: Migrant workers protesting for their rights in South Korea.]