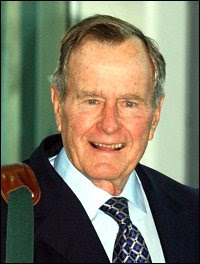 A deja vu of Geneva 1994? Former president George H.W. Bush's possible visit to Pyongyang (as former president Jimmy Carter did in 1994)? US and North Korean negotiators meeting to resolve contentious issues in Geneva, where the Agreed Framework was formulated in 1994 in response to the first crisis over nuclear and security issues? Moreover, is President Lee Myung-bak of South Korea reversing his initial hardline attitudes towards North Korea by offering more dialog with North Korea? Hopefully a satisfactory resolution will come out from all these developments.

News item #1: Former U.S. President George H.W. Bush [photo] arrived in South Korea Tuesday at the invitation of a South Korean company, amid reports that he may also travel to North Korea to help his son make a breakthrough in the stalled nuclear talks.

News item #3: President Lee Myung-bak proposed shuttle diplomacy with North Korean leader Kim Jong-il Tuesday expressing the hope that the leaders of the two Koreas will meet frequently whenever possible. He also clarified his pragmatic policy directions Tuesday, stressing that the national interest should precede the alliance in Korea's relations with the United States.