Beyond the Six Party Talks: The Need to Stop the New Arms Race in Asia? 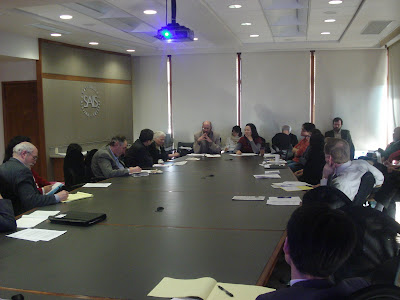 Concerned scholars and activists met on March 20 in Washington, DC (Johns Hopkins University-School of Advanced International Studies) for a workshop on "The Future of the Six Party Talks: New Peace Mechanism or New Arms Race?" [photo] Building upon this discussion, thirty participants met again the next day for a strategy session to chart an international campaign that would address the new arms race in the Asia/Pacific region. The participants noted:

Even as the six countries in the Six Party Talks – the United States, North Korea, South Korea, China, Japan, and Russia – discuss peace, they continue to prepare for war. In the last five years, five of the six countries have increased their military spending by 50% or more. And there is a powerful political movement in the remaining country, Japan, to abandon its "peace constitution" and rapidly increase military spending.

We urge the six countries of the Six Party Talks to freeze their military spending. It would be built on the foundation of the February 13, 2007 agreement in which the six countries agreed to denuclearization, normalization of political relations with North Korea, and a peace treaty (and regional peace regime) to replace the Korean War armistice.

The proposed Pacific Freeze [tentative name] can have not only regional but also global impact. The six countries account for nearly 65% of global military spending (with the United States responsible for nearly 50% of world military expenditures). We recommend that the money that is thus freed up be placed in a Peace Adjustment Fund. Such a Fund can help demobilize soldiers, retrain defense workers, and help the six countries make the transition to the new global Green economy.