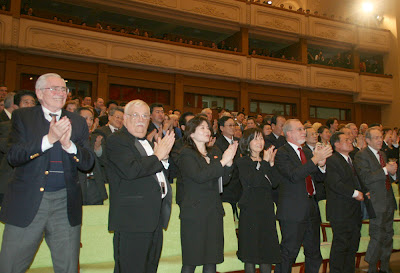 Former U.S. Ambassador to South Korea Donald Gregg and Evans Revere (the two are pictured at the concert with Gregg at far left and Revere next to him, William Perry is at far right), former US diplomat and now the president of the New York-based Korea Society (which helped in organizing the event), who accompanied the NY Philharmonic to Pyongyang, say that the event may have created the right atmosphere for a breakthrough on stalled nuclear weapons diplomacy.

Gregg and Revere had opportunity to talk with senior North Korean nuclear negotiator Kim Kye Kwan, as did the CNN's star journalist Christiane Amanpour, who had a rare opportunity to tour and film the DPRK's foreign ministry and the controversial Yongbyun nuclear facility.