North Korea and the US Engage in Cultural Exchanges 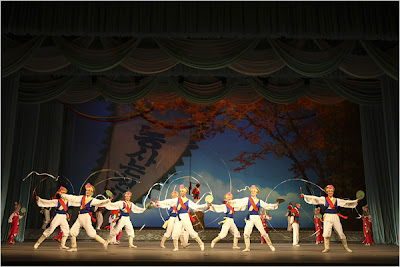 Consider these recent, surprising developments:
- NY Philharmonic playing Gershwin's An American in Paris in Pyongyang, with live TV coverage in North Korea and worlwide
- Rock singer Eric Clapton is considering to accept an invitation to perform in North Korea
- US media gets to tour the controversial Yongbyun nuclear plant
While the focus of US media is mainly on the impact of US cultural presence in North Korea, it is really a mutual experience, as the peoples of the two countries, reared in believing the other was the enemy, came to know each other a bit better through music and display of friendship.
North Korea and the US do not have diplomatic relations yet, but the concert had all the trimmings of a diplomatic event, with the two national flags prominently displayed together and national anthems played back-to-back. The North Korean audience probably heard the Star Spangled Banner for the first time, and likewise, American musicians playing the North Korean anthem got to hear it for the first time. While North Koreans had an opportunity to hear Americans play, the American musicians also got to see performances by North Koreans on the previous day (photo).
While this was going on, US media was allowed to tour the Yongbyun nuclear plant -- the controversial plant that triggered the nuclear crisis and multilateral efforts at nuclear disarmament-- to witness the disablement process that is being attended by --surprisingly-- American technicians.
Despite the recent snag in the implementation of the disarmament/aid agreement, these recent gestures of openness by North Korean officials seem to show their willingness to "reduce enmity between the two countries" and move forward towards the normalization of relations. Will Washington reciprocate by inviting North Korean performers to the US?

The real question is whether Pyongyang would let the performers go to America--and I wouldn't bet on that.

North Korea has allowed performers, atheletes, scientists, engineers and doctors to visit the US, but there hasn't been a large delegation visit such as the NY Philharminic's visit to NK. There is a talk of Pyongyang circus tour of the US. If sponsorship in the US is worked out, that may be a possibility.