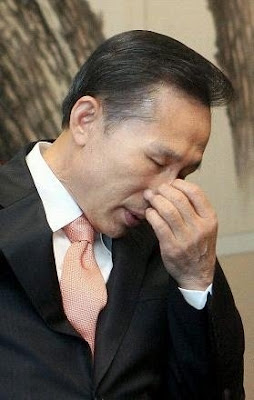 Lee Myung-bak, the newly-inaugurated President of South Korea, is in hot waters already as three of his Cabinet minister nominees have dropped out due to allegations of illicit speculative real estate tradings and other inappropriate business practices. This development makes Lee's promise to elevate South Korean economy to more advanced level fall flat on ethical grounds. All of Lee's ministeral nominees are super-rich and more revelations of inappropriate past ethical practices are bound to surface.

It is also ironic that the Unification Minister-designate Nam Joo-hong had to withdraw from the contention not because of his hawkish position on the reunification issue (he wrote a book called "Reunification Doesn't Exist") but due to ethical issues surrounding his wealth.