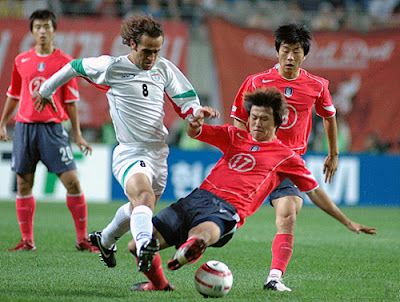 News: "The new Iranian ambassador to South Korea says trade between the two countries reached $8 billion dollars in 2007 and will continue to grow."

That's an interesting development as it seems it is business-as-usual between Seoul and Teheran despite Washington's "axis of evil" rhetoric against Iran. Iran and South Korea usually clashes dramatically during soccer matches (pictured), most notably the hotly-contested Asian Cup, where the two are historical rivals. But on economic terms, the relation has been favorable, ever since South Korean firms made big money in construction industries in Iran and the Middle East since the 1970s. There is even a "Teheran Boulevard," located prominently in downtown Seoul.

It is said that Iran will hold a cultural exhibition in South Korea to promote better ties. It would be interesting to see how the incoming Lee Myong-bak administration will handle relations with Iran. Does his commitment to "strengthen the US-ROK alliance" include playing into Washington's Iran policy? Roh Moo-hyun got heat from Korean citizens for sending troops to Iraq.