"North Korea May Be Taken Off the US's Terrorism List" 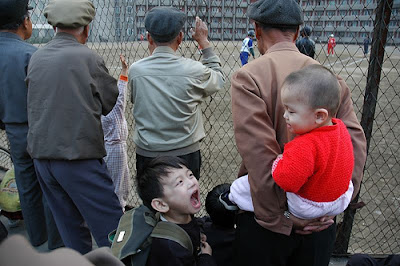 News: "North Korea may soon be on its way to being the second country [after Libya] taken off the State Department's list of state sponsors of terrorism during the Bush administration's war on terrorism. Dell Dailey, the State Department's coordinator for counterterrorism, told a group of reporters yesterday that North Korea appears to meet the criteria for removal."

This reaffirms the use (or misuse?) of the terrorism list as a tool to exert political and diplomatic pressures on the cited nations. As a Congressional aide said succinctly, "We are using this [terrorism list] as leverage ... If push came to shove, it [North Korea] could be delisted tomorrow."

[Photo: Spectators watch a softball game in North Korea, taken by an American tourist, showing a glimpse of ordinary life in North Korea not shown in the mainstream US media.]