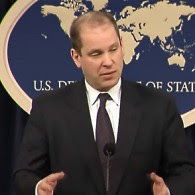 Illustrating a dissension in the Bush administration's North Korea policy, the US government's Voice of America reported: "The State Department [via Spokesman Sean McCormack, pictured] said Friday the U.S. special envoy [Jay Lefkowitz] for North Korea human rights issues was not speaking for the Bush administration when he criticized the conduct of talks aimed at ending Pyongyang's nuclear program." Jay Lefkowitz's position is the byproduct of the North Korean Freedom Act of 2003.

Here is a commentary in full by Timothy Savage, from the North Korea Zone blog:

With the delay on North Korea's nuclear declaration now at three weeks, it was inevitable that we'd start hearing rumblings from the long-repressed neo-cons about the need to return to their favored policy of trying to squeeze Kim Jong-il out of existence. The first shot across the bow came last week, when Jay Lefkowitz, US Special Envoy for North Korean Human Rights, said at the American Enterprise Institute that the North Korean policy was under review and that it was time for a new approach. Lefkowitz has no role in policymaking, nor does he get to sit in on cabinet meetings, so his statements can be taken with the appropriate grain of salt. But he does have ties to the remaining neo-cons that still haunt the West Wing of the White House, so there's some possibility that his statements are more than just wishful thinking.

Now comes confirmation from the New York Times that there is indeed a brewing debate within the administration over whether to return to a harder line -- you know, the one that was so successful in stopping North Korea from extracting plutonium and exploding a nuclear weapon between 2002-2006. It seems that the proponents of the hard line are (wait for it!) in Dick Cheney's office, or at least whatever undisclosed location he's hiding in these days. Meanwhile Rice and Bush still support Chris Hill and his diplomatic efforts. I don't think Rice is going to back down, and as for Bush, these days he seems to have given up any hopes of having a legacy to speak of and is trying to just lay as low as possible lest his historic unpopularity drags the Republican presidential contenders' chances even lower than they already are. Moreover, as Hill points out, “People lambaste the six-party process, and sure, it offers no refuge for those in need of instant gratification. But when asked for alternatives, even the noisiest critics fall silent.”

If there is to be any change in US policy, look for Bush to articulate it in next week's State of the Union address. But I wouldn't hold my breath.