NY Philharmonic's Concert in North Korea To Be Seen Globally 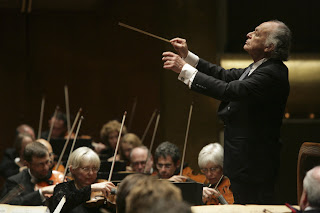 "The Star-Spangled Banner" playing in Pyongyang? Is this a prelude to a warmer US-DPRK relations? Perhaps it will warm the recent chill in the six-nation talks. The concert will take place a day after Lee Myong-bak's inauguration as the president of South Korea. It is unfortunate that the arrangement for the broadcast in the US, where it would matter the most, is not confirmed yet.

News report from the AP — The New York Philharmonic's concert in North Korea next month is to be broadcast live worldwide, the orchestra announced Wednesday. The Feb. 26 concert in the nation's capital is to be conducted by the orchestra's music director, Lorin Maazel, in the East Pyongyang Grand Theatre.

The program will include the national anthems of both North Korea and the United States; the Prelude to Act III of Wagner's "Lohengrin"; Dvorak's Symphony No. 9, "From the New World," and Gershwin's "An American in Paris."

The telecast is to be produced by the New York Philharmonic, EuroArts Music International, ARTE France and South Korea's Munhwa Broadcasting Company. The European Broadcasting Union will also join the effort. Details of the broadcast in the United States have yet to be announced.

The Pyongyang concert is the highlight of the orchestra's two-day visit to North Korea, from Feb. 25 to 27, following the Philharmonic's trip to Taiwan, Hong Kong, Shanghai and Beijing.
The Philharmonic will perform in Seoul, South Korea, on Feb. 28.