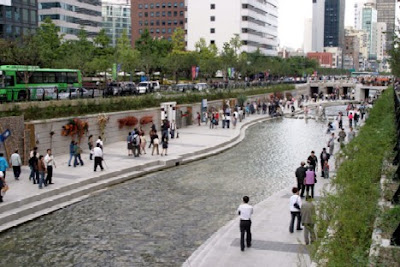 A recent posting, "A Green Bulldozer?", has generated an in-depth commentary and online discussion. (Readers are urged to leave comments on Korea Report postings or engage in discussions. A Facebook group on Korea Report is also available for feedback and discussions.)

"I find John Feffer's sentiments noble but naive. Lee Myung-bak's restoration of the 5.8km Cheonggye stream [pictured], and the building of a small, treeless park in front of city hall, are certainly steps in the right direction, but they don't exactly mark a paradigm shift in Korean's attitudes towards the environment. Personally, I'm a little tired of all the wishful thinking and hype about Lee Myung-bak's eco-credentials. The 'postive signs' Feffer mentions, for instance, were all products of the previous Roh Mu-hyeon administration, but I'm sure Lee Myung-bak will take credit for those too. In the meantime, he seems determined to go ahead with his bizarre and wasteful canal project. Actions speak MUCH louder than words (and unenforced legislation) in Korea, so as far as I'm concerned the jury is still definitely out on Lee Myung-bak's newfound environmentalism."

Author John Feffer of the original posting replied:
"Thank you for your comment on my op-ed. For the record, I have no illusions about LMB. But I do believe that it might be possible to take advantage of his own view of himself as an eco-friendly leader to push him further in that direction. A paradigm shift has not taken place in Korea, certainly. But it's not inconceivable. Just as RMH came in with the support of the labor unions only to push through the FTA, I'd like to see LMB come in with the support of the business community and push through a truly green platform. When trying to persuade a leader, it is always best to use sugar rather than salt. He hasn't taken office yet. There will be plenty opportunity to criticize his policies later. If his actions prove unacceptable, I will definitely say so."

Hello everyone. This is how I replied to John's email:


"...please forgive my description of your op-ed as naive. Actually, I fully agree with your idea that LMB's self-image as an eco-friendly leader is an opportunity that ought to be exploited.

In my own defence, I wrote that comment shortly after clearing away some old Time magazines that my wife used to use to study English (I'm an Economist and Guardian Weekly man myself, a nice balance I feel), and had just read a (typical for Time magazine) overly-pleasant, one-sided, lightweight article on LMB's environmentalsim in that (pp.16-20, May 15th 2006 if you're interested, I'll give a link below). On top of that, I'd also just finished the last post in a recent series on my own blog on how he has reneged on his pre-election promises to strengthen the Ministry of Gender Equality and Family, a mere two and half years old, and will instead downsize and merge it into the Ministry of Health and Welfare. So, unfortunately by the time I got to your op-ed at Korea Report I was frankly a little tired of all the hype I'd already read about him!

Thanks for replying so soon, to my first ever comment on Korea Report no less(!), and I look forward to reading more of your work in the future"

Sorry, the comments section doesn't seem to give me enough room for links. Let me try to give you it this way:

Here is the first half:

My Name is Mrs Monica Roland, i live in Denver CITY, USA and life is worth living comfortably for me andmy family now and i really have never seen goodness shown to me this much in my life as i am astruggling mum with two kids and i have been going through a serious problem as my husband encountered a terrible accident last Two weeks, and the doctors states that he needs to undergo a delicate surgery for him to be able to walk again and i could not afford the bill for his surgery then i went to the bank for a loan and they turn me down stating that i have no credit card, from there i run to my father and he was not able to help, then when i was browsing through Internet i came across a loan lender Name Mr.Jubrin Mohamed who provides loans at an affordable interest rate and i have been hearing about so many scams on the Internet but at this my desperate situation, i had no choice than to give it an attempt and surprisingly it was all like a dream, i received a loan of $30,000 USD and i paid for my husband surgery and thank GOD today he is okay and can walk and is working and the burden is longer so much on me anymore and we can feed well and my family is happy today and i said to myself that i will shout aloud to the world of the wonders of GOD to me through this GOD fearing lender Mr.Jubrin Mohamed and i will advise anyone in genuine and serious need of loan to contact this GOD fearing man through is office Email at: jubrinunityfinancialloan@gmail.com