US Diplomat Christopher Hill in Pyongyang 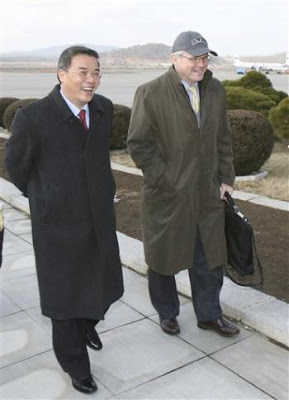 A picture worth thousand words? Do big smiles on the diplomats of the US and DPRK reflect warming of relations between the two countries which have failed to reconcile their Cold War animosities and have not normalized relations for nearly six decades?

Assistant Secretary of State Christopher Hill (pictured at the Pyongyang airport on his arrival with a North Korean diplomat) is in Pyongyang and has toured the Yongbyon nuclear facilities, as a part of ongoing work to disable the plutonium-producing reactor being conducted under a six-nation agreement on North Korean nuclear diarmament and concurrent normalization of US-NK relations. The details of the agreement are being actualized according to the schedule. We will know by end of December if the agreement will hold water for a true settlement of contending issues.

On another related development, contradicting current US posture towards Iran, US intelligence report suggests that Iran is not currently trying to develop nuclear weapons. Will we see similar assessment on North Korea's alleged highly-enriched uranium program, or clear explanation by North Korea?

They look good having big smile. I hope their future and relations are in a period of detente, that day are coming soon.