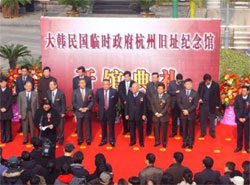 According to a recent survey in China, South Korea is considered as China's least favorite neighbor, surpassing Japan as China's most unpopular neighbor. Perhaps this is due to lingering ideological differences or China's close alliance with North Korea, but this public opinion seems odd since China and ROK have improved relations drastically since the normalization in 1992. Trade between the two countries has expanded rapidly as South Korea is now China's fourth largest trading partner and China has surpassed the US as South Korea's largest trading partner. Perhaps the Chinese people see South Korea as an economic competitor? Looks like the South Korean government and businesses need to expand their public relations efforts in China.

On the other hand, South Koreans on a recent survey ranked overwhelmingly the US first (no surprise there) and China as second as their favorite neighbor.

[Photo: The recent opening ceremony to celebrate the reconstruction of the Korean provisional government (during Japanese colonialism) building in Hangzhou, China, suggests warmer official relations between the two countries.]