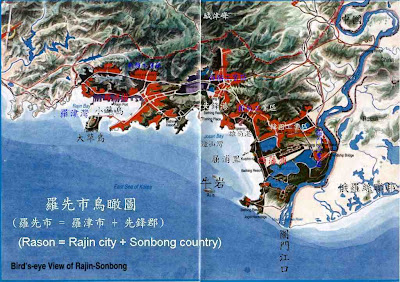 News: "Russian Railways plans to build a $100 million container terminal in North Korea as the world's largest rail company tries to create a land transport corridor linking Asia to Europe."
Commentary: In another new development that showcases the promises of multilateral economic cooperation in Northeast Asia, Russian Railways, in a joint venture with North Korea, wants to turn the North Korean port city of Rajin (located in the northeastern tip of North Korea bordering China and Russia, see map above) into a railway hub for shipments, mainly South Korean products, across Russia to Europe, linking the Korean peninsula (thanks to recently-opened inter-Korea railways) to the Trans-Siberian Railway. This will help revitalize the Rajin-Sonbong Economic Special Zone in North Korea, as well as highlight economic cooperation in Northeast Asia among Russia, North Korea and South Korea.