US Film Festival to Showcase Films from Both Sides of Korea 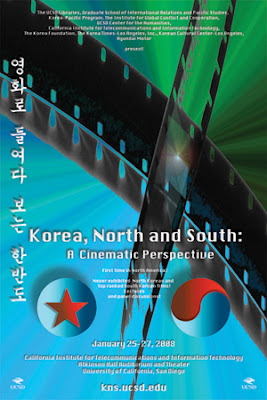 In another example of growing cultural engagements that will showcase reconciliation between the two sides of Korea and between North Korea and the US, a film festival called Korea, North and South: A Cinematic Perspective will be presented Jan. 25-27 at the University of California, San Diego.

The three-day event is the first North American Korean film festival dedicated to films from both sides of Korea. Moreover, a representative from the DPRK Mission to the United Nations in New York City, in a rare visit outside NYC (North Korea's UN diplomats can travel outside the NYC area only with special permission from the US State Department due to the lack of diplomatic relations between the two countries), will be joining ROK Consul General in Los Angeles as guest speakers.

Previous attempts to introduce North Korean films to US audiences were often met with opposition and demonstrations from Korean-American anti-communist organizations, but now with the backdrop of expanded inter-Korean cultural exchanges and cooperation, this event will signify yet another sign of the thawing in US-DPRK relations, as the American general public will have more cultural access to North Korea.