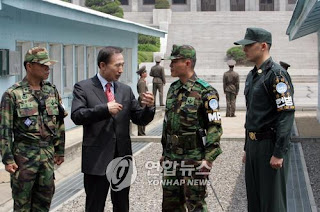 Now that Lee Myung-bak of the conservative Grand National Party has won South Korea's presidential election with strong emphasis and promises on the economy, his foreign policy and diplomatic skills will be tested, mainly in regard to the impact on inter-Korea relations and ROK-US relations. Will he give a lip service to inter-Korean rapproachement and cooperation and unravel many facets of reconciliation mechanisms already in place? Will he walk away from economic benefits foreseen in inter-Korean and multilateral economic ventures in Northeast Asia? How will he handle the mood for detente between Pyongyang and Washington?

[Photo: Lee making a visit to Panmunjeom/DMZ earlier this year. His predecessor walked across the DMZ to push for inter-Korea detente, how will Lee treat that symbolic line?]

Though he won easily, the controversy over his coverup (lying) of involvement in the investment fraud case ("BBK" case) ensues, with independent investigation of the case to produce findings before he gets sworn in as the next president. This will likely mar his presidency and spill over to the next general election in April. His promise of South Korean economic ascendency will look thin if he himself is implicated in business ethics wrongdoings, especially when another probe on corruption allegations against Samsung is taking place.