"The Paradox of East Asian Peace" 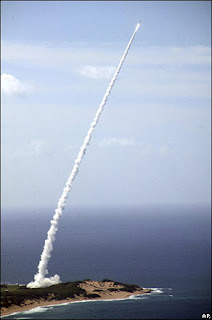 John Feffer of Foreign Policy in Focus has written an extensive article on "The Paradox of East Asian Peace" that calls for an establishment of multilateral regional peace and security structure and demilitarization through reductions in military spending of the six nations currently involved in the nuclear disarmament talks.

Feffer argues: "A regional peace and security mechanism in Asia, if it doesn't address this central fact of an arms race among the participants in the Six-Party Talks, will be toothless. More critically, since the six countries represent the lion's share of world military spending and arms exports, a significant restraint on Pacific militarism will have global implications.

The solution to the global arms race lies in the hands of countries involved in the Six Party Talks--or, rather, the citizens of those countries who press for a freeze and then substantial cuts in military spending. If the world's most profligate military spenders commit to real demilitarization--and not just a restraint on North Korea's nuclear program--then they will resolve the final security paradox of Northeast Asia. By so doing, they will bury the Cold War once and for all."

[As an indication of renewed arms race in East Asia, Japan is developing an anti-ballistic missile defense system, which recently tested an interception of a mock missile shown in the photograph. -ed]