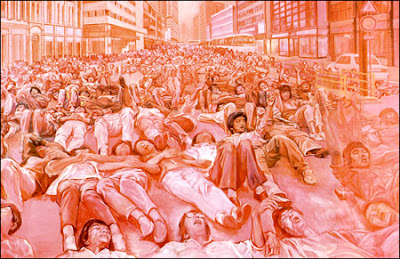 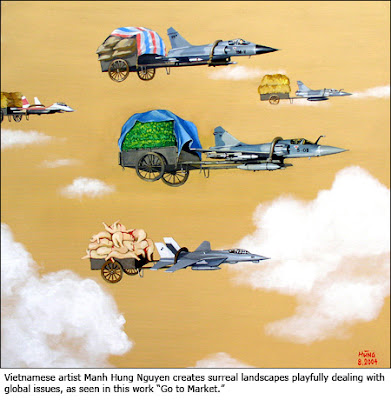 Yong Soon Min, a Korean-American artist-curator who had helped to introduce the minjoong art ("people's art" born out of the pro-democracy movement of South Korea in the 80s) to US audiences, has opened a new exhibition with Vietnamese-American co-curator exploring the interconnection between Korea and Vietnam, modern history and contemporary pop culture.
Excerpts from the Curators' Statement: "transPOP: Korea Viet Nam Remix introduces a dynamic mix of sixteen critically acclaimed artists from Korea, Viet Nam, and the United States, signaling an unprecedented engagement with the rich historic and contemporary linkages between Korea and Viet Nam. The featured artworks explore interconnections between the two countries, including the intersections of history, trauma, and contemporary popular culture.
The interactions between Viet Nam and Korea span centuries but the exhibition focus lies in their shared history of a highly accelerated modernization process with militarized roots and the Cold War. During the American War in Viet Nam, the Republic of Korea was the second largest foreign military and economic presence in Viet Nam behind the United States, with over 300,000 combat forces and approximately 24,000 skilled workers in exchange for substantial U.S. aid. The financial boon from the involvement in the war played a catalytic role in the development of Korea, laying the foundation for what is now the world's 12th largest economy.
The legacy of the Cold Wars is evident in the large Korean and Vietnamese diasporic communities in the U.S. In Vietnam, this accelerated modernity is evident in the breakneck speed of current economic development, as well as its entry into the World Trade Organization.
Since the late nineties, Viet Nam and Korea has witnessed a significant development of popular culture, fostering greater cultural proximity locally and abroad. A global phenomenon known as the "Korean Wave," has popularized Korean television dramas, pop stars, music, films, and fashion through East, Southeast Asia and beyond since the new millennium. As part of a growing inter-Asian flow of pop culture, the Korean Wave has had a significant impact in Vietnam, spurring numerous joint efforts between the two countries. V-Pop, or Vietnamese pop music and film, has created an explosion of pop stars and media products in Viet Nam and overseas. These popular representations of the negotiations between modernity and tradition, in addition to burgeoning consumer culture, suggest new subjectivities. The triangulated relationship between Korea, Vietnam and the U.S. forged through war in Vietnam is also manifest in the increased cross-pollination of cultural influence and exchange."
The exhibition is in South Korea, with subsequent exhibitions scheduled in California in the fall of 2008.