The Nanjing Massacre and Reconciliation in East Asia 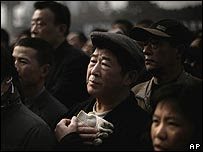 A new site of mass slaughter was revealed by efforts of a persistent Japanese teacher who set up a hotline for former Japanese troops who had served in Nanjing to call up. This and other conscientious efforts by some Japanese citizens in facing the dark pages of the Japanese military expansion in East Asia contrasts with the Japanese authorities and conservative elements who are still in denial of historical truths and are countering with revised history textbooks that whitewash many of war crimes and crimes against humanity.

East Asia is now poised for true peace and prosperity for all the nations and peoples, overcoming a long history of conquests, subjugations, poverty, colonialism, wars and ideological rifts. Japan, as the economic leader in the region, needs to reconcile its past with its neighbors and move forward in a future-looking perspective towards regional collaboration. The contending issues over the wartime "comfort women," biological and chemical weapon testings, and former POWs and forced labor need to be addressed as well as the current controversy over the Yasukuni shrine and revision of textbooks.

Non-governmental efforts have elevated these issues to the forefront, mainly the "comfort women" issue and the history textbook issue. International grassroots collaborations have produced results: for example in the US, US Representative Mike Honda, a Japanese descendent, working with Korean-Americans, was instrumental in passing a Congressional resolution on the "comfort women" issue, and in another example in Northeast Asia, a unique collaboration of scholars from China, Korea and Japan have produced joint textbooks on modern East Asian history in respective languages that foster mutual understanding of the past and common perspectives for the future. See a similar effort on memory and reconciliation.