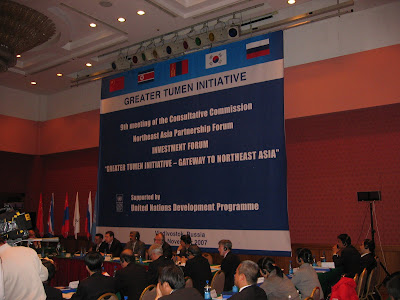 Guest Kuhn Seo of San Francisco sent in this photograph of meeting he attended in Vladivostak, Russia -- The Greater Tumen Initiative (GTI), which brought governments (China, DPRK, ROK, Mongolia, Russia) and business representatives to further strengthen regional cooperation for economic growth and sustainable development in Northeast Asia. According to the GTI, supported by the United Nations Development Programme (UNDP), it "provides a unique multilateral forum for the member countries to identify and implement regional initiatives that encourage economic growth and improved living standards in Northeast Asia. By focusing on regional economic cooperation, the GTI contributes to peace and stability in the region."

The Greater Tumen [Tuman in Korean, from the Tuman River that borders China, Russia and North Korea. The name derives from a Mongol word.] Region includes the three Northeast provinces and Inner Mongolia of China, the Rason Economic and Trade Zone of DPRK, Eastern provinces of Mongolia, Eastern port cities of ROK and the part of the Primorsky Territory of Russia.

Seo says that time and conditions are ripe for joint economic cooperation in Northeast Asia, as China is looking for a next generation of industrial projects in its Northeastern provinces, Russia wants to develop oil and gas industries in the Siberian region and sell to countries in Northeast Asia [There is a proposal to build gas pipeline from Siberia to the Korean peninsula.], South Korea and Japan want to use the Siberian railroad to deliver their industrial products to Europe using the recently re-connected inter-Korea railroad, and North Korea can reap economic benefits from all these projects.

All of these plans needs an establishment and improvement of infrastructure at the Tuman River region. International investors will look for peace and stability in this region, therefore US-DPRK normalization and a peaceful settlement of security issues are necessary ingredients for this potential to blossom into reality. For a region that has been devastated by conquests, colonialism, wars and ideological confrontations, a true multilateral approach to economic prosperity for the peoples in the region is a refreshing idea. And as the six-nation negotiations on nuclear disarmament and security issues paved a way for multilateral approach for resolving the region's contending issues, similar multilateral approach on economic matters may be needed.