From Jimmy Carter: Man from Plains official film site [see trailer, in theatres now]: "Jimmy Carter Man from Plains is an intimate, surprising encounter with President Jimmy Carter. Following the path of Mr. Carter’s recent controversial book tour for Palestine: Peace Not Apartheid, AcademyAward-winning director Jonathan Demme reveals a complex individual who, with the gusto and determination of a youngster, criss-crosses the country to get his message across, even as that message creates a media onslaught in which his credibility and judgment are called into question. Jimmy Carter Man From Plains explores both the private and public sides of Jimmy Carter, whose intense sense of justice compels him to pursue, with undiminished energy and hope, his lifelong and deeply spiritual vision of reconciliation and peace."

Commentary: The moving portrayal of Jimmy Carter the peacemaker, humanitarian and activist, a 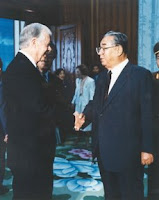 s he courageously tackles the thorny issue of the Israeli-Palestinian situation, also includes his mention of his role in preventing a potential outbreak of war between the US and North Korea in 1994 due to tensions arising out of North Korea's nuclear program. With a strong conviction for peacemaking and bold diplomacy, former President Carter visited North Korea on his initiative and met with then President Kim Il Sung (pictured), which led to US-DPRK negotiations that resulted in the Agreed Framework [see Historical Document menu on the right side of this site]. Today, the US and North Korea are trying again to use that spirit of negotiated settlement to resolve security and nuclear nonproliferation issues, as well as address other outstanding issues between the two sides.