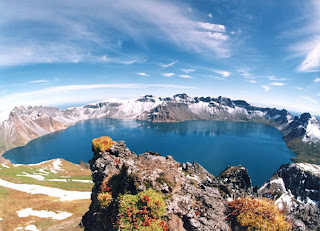 Mt. Baekdu, the highest mountain in the Korean peninsula which the Koreans consider the place of their ancestral origin, will now be accessible to South Koreans. A direct air route will be established next May, in line with one of the agreements made at the inter-Korea summit in October.

South Koreans have been visiting the mountain -- from the Chinese side -- since the (disputed) border with North Korea bissects the mountain and the North Korean side had not been open to tourism. Now, South Korean tourists will be able to take a shorter trip using the direct route from the Korean side, climbing on Korean soil -- a more meaningful experience for Koreans. This is another concession by North Korea, which considers the Mt. Baekdu area a sacred grounds of its revolutionary roots.

More and more, North Korea is no longer a forbidden place for South Koreans to visit as several tourist destinations in North Korea -- Mt. Baekdu, Mt. Keumgang, Pyongyang and Gaeseong -- are open for tourism. However, some have raised concerns about environmental impact of increasing tourism and joint economic activities in North Korea.