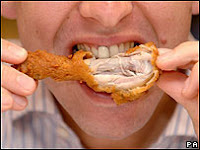 Believe it or not, North Korea will get its first fast food chain outlet -- fried chicken delivery service -- in Pyongyang, which would be the first foreign-run restaurant in North Korea, and it will be run not by a Japanese, European, or American company-- it will be jointly run by a South Korean entrepreneur and a North Korean trading company. North Koreans do not consider South Koreans as "foreigners," but rather as fellow "brothers and sisters," so this joint venture would be another indicator of ever-increasing inter-Korea cooperation, using "minjok jabon (pan-Korean capital)."