Some Thoughts on the Inter-Korea Summit 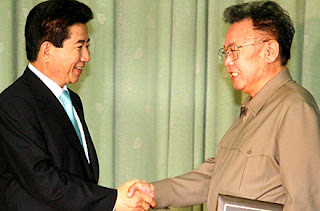 [The successful second inter-Korea summit inspired me to re-activate this blog after a long hiatus. Stay tuned for reports on rapidly changing developments in relations amongst peoples and nations in Northeast Asia and the US. -ed.]

On October 2, 2007, President Roh Moo-Hyun of South Korea stepped across the Military Demarcation Line (MDL) that divides Korea. Instead of flying from Seoul to Pyongyang, by walking from the Republic of Korea into Democratic People's Republic of Korea for the inter-Korea summit that took place from October 2-4, 2007, Roh made a powerfully symbolic gesture toward an eventual inter-Korean reconciliation and reunification. END_OF_DOCUMENT_TOKEN_TO_BE_REPLACED
Korean Leaders Invite the US and China for Korean Peace Treaty