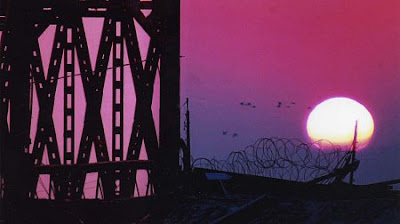 Sun rises over the barb-wired demilitarized zone (DMZ) in Korea, bringing renewed hopes for peace and reconciliation in Korea in 2007. The rebuilt railroad bridge reconnects a railroad line between the two sides of Korea that has been severed for over five decades -- a symbolic accomplishment of inter-Korean rapprochement that has occurred over the past few years, following the unprecedented inter-Korea summit in 2000. But the actual railroad service has been postponed due to a recent chill in inter-Korean relations and the unresolved disagreements over North Korea's nuclear program and security guarantees.

The railroad line would enable a train from Seoul to reach Pyongyang, and allow continued connection to railroad lines across Asia and to Europe -- foretelling potential peace and prosperity in Northeast Asia and beyond. Whereas economic cooperation between the two sides of Korea continues, most notably in the Kaesong industrial complex in North Korea, where South Korean managers work side by side to North Korean workers, a prolonged delay in the "re-opening" of the inter-Korea railroad line would be a set-back for the reconciliation process in Korea.

With the resumption of the six-nation talks, a breakthrough in the stalemate is one of the top priorities of 2007. Among participating nations, political dynamics will likely change as the Democrat-controlled Congress will assert more voice in the US's Korea policy and as South Korea prepares for a presidential election. The military alliance between the US and South Korea will continue to be on spotlight, as the planned relocation of US military headquarters to Pyeongtaek runs into resilient opposition. The controversial Korea-US FTA (Free Trade Agreement) negotiations will come to head in 2007, confronting wide opposition from the laborers and farmers in Korea.