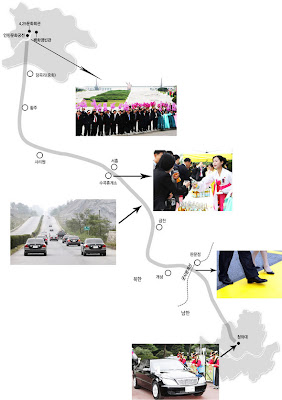 "From Seoul to Pyongyang" ("서울에서 평양까지") was a popular song in South Korea more than two decade ago about a taxi driver who laments about not being able to drive to Pyongyang (a few hours drive) and yearns for the day when the barrier of division is removed so that he can take passengers (and himself) to Pyongyang.

That barrier was symbolically removed when Pres. Roh Moo Hyun went to North Korea for the summit on Oct. 2, 2007, by driving across the DMZ and into North Korea.

He started out at the president's office (bottom on the graphic) in Seoul, drove on the northbound highway, which recently was re-connected with North Korea as a symbol of inter-Korean reconcilliation. When he came to the Military Demarcation Line in the DMZ that divides Korea, he came out of the car and walked across it. The motorcade of South Korean delegation then drove on the North Korean highway towards Pyongyang.

All this in four hours. So easily done -- now this should be repeated more and more to help break down the barrier of the Korean division.