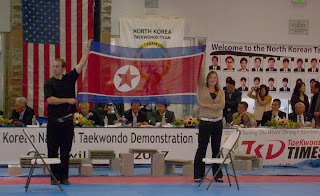 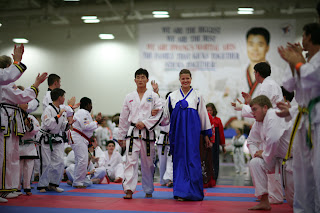 Immediately following the inter-Korea summit in Korea, on the other side of the globe, another historic event unfolded -- North Korean taekwondo exhibition team toured the US. This was the first instance of North Korean athletes being allowed to tour the US, other than in international sporting events. The organizers of the event were frustruated with many years of the State Department's refusal to grant visas to North Koreans. This year, perhaps reflecting a hint of rapproachement between Washington and Pyongyang as the result of the six party talks and bilateral approaches between the US and North Korea (which includes discussions on normalization of relations), the visas came through.

In a releated development, the New York Philharmonic is planning to tour North Korea. Also, a Chrisitan US band performed in Pyongyang music festival this spring, learned to sing a North Korean peace song, and is showing the video of its tour of North Korea during its subsequent US tours. These and other people-to-people exchanges will likely promote better undrestanding between the two nations and help thaw the antagonistic relations.