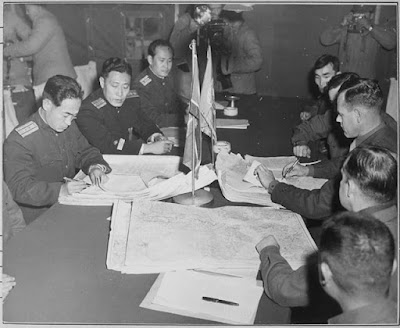 Today marks the 67th anniversary of the signing of the Korean War Armistice Agreement, and yet we still do not have the “final political settlement” inscribed in the agreement. So, technically the Korean War has not officially ended, lacking a peace treaty that will replace the armistice and the ensuing uneasy truce.

Political/diplomatic dynamics have drastically changed in many ways since 1953, with the end of the Cold War for example, but the logical players that need to initially seek the peace settlement in Korea are still the nations behind the sig natories of the armistice: the United Nations Command (the US), the Korean People’s Army (North Korea), and the Chinese People’s Volunteer Army (China).
South Korea did not sign the armistice in protest at the time (but did it regardless by being a part of the UN Command, and under the US command), but made several subsequent peace agreements with North Korea and is committed to inter-Korean rapprochement. The US and China normalized relations in the 70s. China (and Russia) normalized relations and made peace with South Korea. Both sides of Korea have become members of the UN and the UN has distanced itself from the UN Command in Korea, making it defunct in reality and making the UN incapable of being an arbiter in the resolution of the “Korea question.” The only remaining foreign troops in Korea are the US troops. And the only relation that has not changed after all these years is between the US and North Korea.
The talks between Washington and Pyongyang have again stalled, but they need to be resumed in light of the continuing uncertainty and volatility created by the absence of a peace treaty ending the Korean War. It is about time to put an official closure to the Korean War and chart a new path towards a meaningful peace settlement in the Korean Peninsula.