Some Afterthoughts on the “Parasite” Success 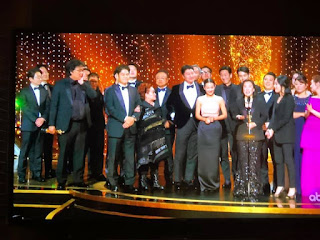 1) Director Bong Joon-ho (and actor Song Kang-ho who portrays the main character of the film) was one of many artists arbitrarily blacklisted by the former, conservative government of Park Geun-hye for “leftist tendencies.” Yet it is Bong who elevated South Korean cinema to global recognition and fame through his films touching on social themes and realities. The Candlelight Revolution that led to the downfall of the Park government (through impeachment) helped open up creative freedom that led to “Parasite.”
2) The second speaker who unexpectedly (or inappropriately) spoke in length during the Oscar Best Picture acceptance speech was Miky (Mi-kyung) Lee, vice chair of the CJ Entertainment and Merchandising, the investor/distributor of the film. It was inappropriate that she thanked her brother Lee Jae-hyun, the CJ Group chair, who was charged several times and imprisoned for financial crimes. She is granddaughter of Samsung chaebol (congrelemerate) founder Lee Byung-chul. Though her interest in cinema and the arts has helped fund and distribute films like “Parasite” and bring it to international attention, it is ironic that a superrich tycoon who lives lavishly in Beverly Hills is pitching a film about inequality of wealth. Better to have yielded the speaking opportunity to Song Kang-ho who appeared in many of Bong's films.
3) Korea has 100 years of cinema history, with many notable works. The success of "Parasite" is a vindication of long overdue international recognition of the Korean cinema. Hopefully with the impact of “Parasite,” South Korea will produce more films that reflect creative visions of directors and independent filmmakers. More great works are to come, for sure.
[An upcoming South Korean film “Emergency Declaration” deals with the abuses of the KCIA (Korea security/intelligence agency) during the repressive Park Chung-hee (Park Geun-hye's father) regime in the 70s and 80s.]

How to convert Litecoin to USD, you can convert lotcoin to usd dollars, it is use to dollars buy any thing. it use to get instant any thing in marketing.