Korean Americans Call for Genuine Peace Ahead of Kim-Trump Summit 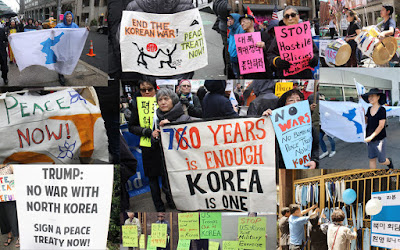 Ahead of the much-anticipated U.S.-North Korea summit scheduled to take place on June 12, Korean Americans are speaking out for an end to “seven decades of hostile relations” between the two countries and a “new era of peace.”

Joined by civil rights leader Reverend Jesse Jackson, Sr. and renowned social critic Noam Chomsky, 153 organizations across the United States and around the world released a joint statement today calling for a formal end to the Korean War and replacing the 1953 armistice with a permanent peace treaty to move towards establishing normal relations between the two countries.

HK Suh, Vice President of the National Association of Korean Americans, one of the forty-six Korean American organizations that initiated the joint statement, said, “Korean Americans want genuine peace on the Korean peninsula. The unresolved status of the Korean War has been at the root of the U.S.-North Korea conflict. It is our hope that when the leaders of the United States and North Korea meet in Singapore, they will pledge to sign a peace treaty and normalize relations.”

Christine Hong, of the Korea Policy Institute said, "North Korea has paved the way for this peace process to unfold, including by releasing three Korean Americans imprisoned for hostile acts in North Korea and dismantling its nuclear testing site in Punggye-ri. The time is ripe for Donald Trump to meet positive action with positive action, with the goal of creating a nuclear-free Korean peninsula and thereby setting a historic precedent for global disarmament."

Reverend Jesse Jackson, Sr., who endorsed the joint statement, said, “We are on the brink of resolving a seven-decade old conflict that almost turned into a nuclear war. Leaders in Washington should put aside partisan interests in the historic interest of global peace and resolve to support a peace agreement that will lead to a unified Korea and normalized relations between the United States and North Korea.”

The full text of the “Statement of Unity by Korean Americans and Allies on the Historic Inter-Korean Summit and the Upcoming U.S.-North Korea Summit” and list of endorsers can be viewed here: http://www.zoominkorea.org/statement-of-unity-on-the-upcoming-u-s-north-korea-summit/