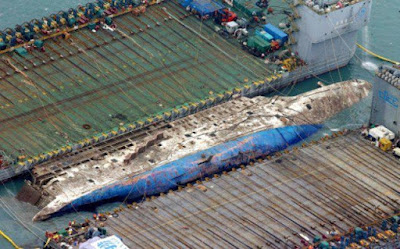 The sunken Sewol ferry has been raised from the bottom of the sea, near the third anniversary of its tragic sinking. Many questions still remain to be answered. The captain and crew got prison sentences for negligence, but it remains to be seen the true nature of the former Park Geun-hye's government in handling (or mis-handling) this incident and (delayed and disorganized) recovery efforts. Perhaps the current prosecution of Park Geun-hye will shed some light on this.


Hopefully the remains of the nine missing passengers will be found and some closures can be made for the families of the victims (304 bodies were retrieved, mostly high school students from one South Korean school on a school trip). The families went through tough ordeal because the government had portrayed them as being anti-government even though they were simply demanding answers.