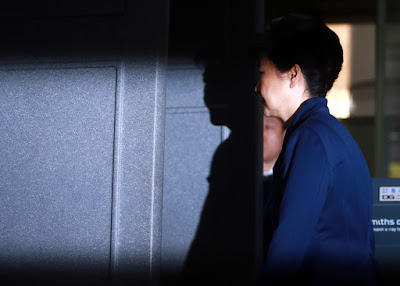 
Former president Park Geun-hye has finally been put in jail. After Kang Bu-yeong, the judge in charge of warrants for the Seoul Central District Court, issued an arrest warrant for charges including bribery on Mar. 31, Park suffered the ignominy of being South Korea’s third former president to be jailed. While personally, this was no doubt a very unfortunate development, legally speaking, it was the obvious outcome.

While there were some who said that Park should be shown lenience out of respect for her status as former president or for the sake of national harmony and unity, it’s significant that the court has affirmed once again the great principle of the rule of law, namely, that all citizens are equal before the law. We hope that Park’s arrest will be a turning point confirming that the Republic of Korea is a democratic republic and ensuring that politics and leaders who think of themselves as above the Constitution and the law and who roll back democracy have no place in this country. READ MORE

Thank you to tell us so much useful information. I’m glad to read it. For more information visit legal herbal empire for sale


Many people always like prefer Karachi Escorts, and they enjoy forever to find their ideal one. Our Escorts Agency in Karachi offers a lot of gorgeous Pakistani models Escorts in Karachi Pakistan, which provides a lot of pleasure & fulfill their sexual hunger as they required.