Petition Campaign in Opposition to the Deployment of THAAD in South Korea Surpasses 100,000

The "We the People" whitehouse.gov petition campaign in opposition to the deployment of the THAAD anti-missile defense system in South Korea has surpassed the 100,000 threshold mark needed to obtain an official response from the White House on the issue.

The petition campaign was initiated by Korean Americans based in the Washington, DC area and spread across the U.S., and the momentum intensified as Koreans in South Korea joined in, including citizens of Seongju where the deployment will take place,  signifying widespread opposition to the move by the South Korean government. 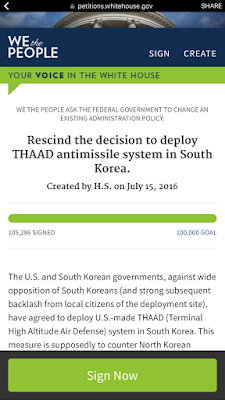