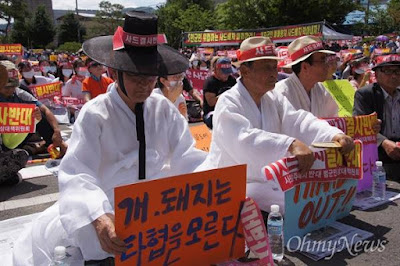 Opposition to THAAD antimissile system in South Korea is growing, especially fervently by the residents of Seongju (where the THAAD system will be placed), who are concerned about adverse health effects on residents nearby the system.


Koreans in the U.S. has initiated a petition campaign:


The U.S. and South Korean governments, against wide opposition of South Koreans (and strong subsequent backlash from local citizens of the deployment site), have agreed to deploy U.S.-made THAAD (Terminal High Altitude Air Defense) system in South Korea. This measure is supposedly to counter North Korean ballistic missiles and provide additional security, yet this is a controversial move that will likely to escalate tension in the region, by provoking North Korea, China and Russia into a spiraling arms race in the region that is already heavily militarized with weapons of mass destruction. Now, more than ever, is the time to step back and de-escalate tensions by pursuing negotiated settlements that will provide sustainable peace mechanism in the Korean Peninsula and the surrounding region.
https://petitions.whitehouse.gov/petition/rescind-decision-deploy-thaad-antimissile-system-south-korea