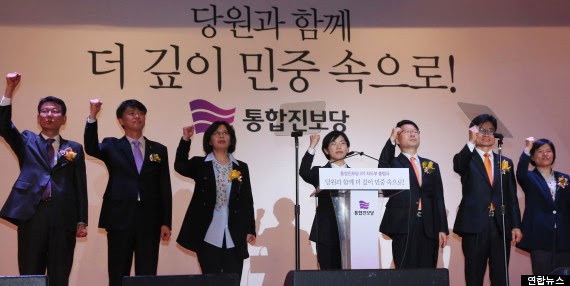 The decision by South Korea's Constitutional Court to ban the United Progressive Party (UPP, the photo above shows its rally in recent election), the first such measure in South Korea's history, is another blow to South Korea's hard-earned democratic gains.  Without concrete evidence, the court yielded to the Park Geun-hye government's demand to dissolve the UPP, vaguely alluding that the UPP party platform calls for North Korea-style system in South Korea. In actuality, the UPP's platform resembles more of social democracy platforms of legitimate political parties in Western Europe and Latin America. This measure is in line with the Park government's attempts to label almost all opposition as being "pro-North Korea" and deemed to be prosecutable under the draconian Cold War vestige of the National Security Law.

In another development, a right-wing terror (small bomb thrown by a high school student) disrupted a talk show by Eun-Mi Shin, a Korean American housewife who were on a speaking tour to share her insights from visits to North Korea.