Concerns Mount on Regression of Democracy in South Korea 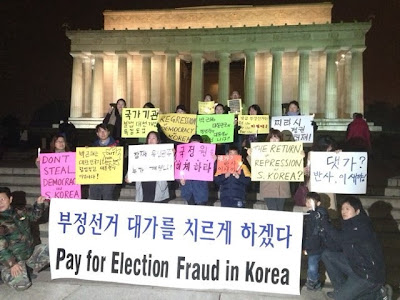 We Denounce Election Fraud and
Regression of Democracy in South Korea!

We, concerned Koreans and Korean Americans in the Washington DC area, are outraged at recent political developments in our homeland, South Korea. Ever since the election of Park Geun-hye as the president, we have seen a regression of hard-earned democracy in South Korea.


The manner in which Park was elected is controversial as it was revealed that governmental agencies, such as the National Intelligence Service and the military’s cyber force, which should have remained neutral during elections, interfered illegally in the election process by distributing massive social media messages aimed at bolstering the conservative candidate Park and demonizing the opposition candidate Moon Jae-in.


Rather than addressing this critical issue and taking responsibility, the Park government has pressured the prosecutors’ office to sidestep further investigations, in a way colluding to election fraud of the last presidential election. Moreover, suppression of legitimate opposition political parties and citizen groups have begun – reminiscent of McCarthyism and dictatorship era of Park Chung-hee, the father of Park Geun-hye.
In solidarity with conscientious Koreans in Korea and overseas, we have gathered here in front of the Lincoln Memorial – a symbol of democracy and fairness – to demand the restoration of democracy and political fairness in South Korea.