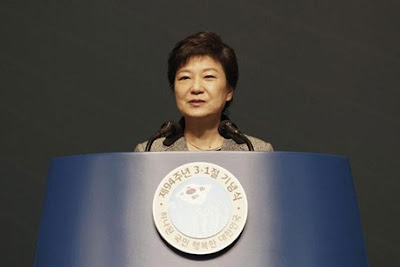 Park Geun-hye, the eldest daughter of the late dictator Park Chung-hee (18 years of iron-fisted, repressive rule), has assumed the presidency of South Korea. She has returned to the Blue House (South Korea's presidential residence/office) after 34 years, having served as the First Lady after her mother was assassinated.

South Korea has changed drastically since her last stay in the Blue House, as hard-earned democratization took a firm hold on the Korean society and politics, with a 5-year, single-term presidency in place.  She has been elected in a free election, thanks to the conservative base, with a promise to rejuvenate the economy and implement some welfare programs, despite her being the most conservative candiate of the presidency. She has also promised to pursue a different approach to North Korea than the confrontational approach of her predecessor Lee Myung-bak -- this will be tested in coming days as tensions mount with North Korea.

Much are expected from her presidency, as she needs to shed the legacy of her father's authoritarian rule in order to avoid the label "daughter of dictator" and pursue receptive policies that will bring together the fragmented and politically polarized South Korean populace.