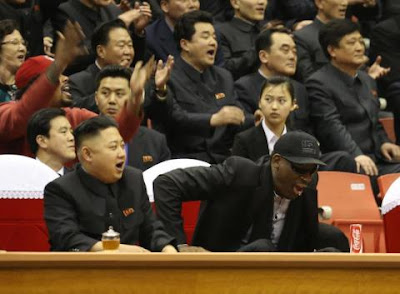 Who would have thought -- North Korean leader Kim Jong Un laughing side-by-side with Dennis Rodman of the Chicago Bulls fame, at a friendly basketball match in Pyongyang. Rodman is travelling in North Korea with members of the Harlem Globetrotters and a US cable news team. And one of the first tweets coming out of North Korea now that North Korean authorities have allowed the use of smartphones by foreigners, with internet access:  "Um ... so Kim Jong Un just got the [cable news team] crew wasted ... no really, that happened" came out of the reception given by Kim to American visitors.  Fun respites amidst war games and counter threats between the U.S. and North Korea -- sort of reminds of the song by the group War, "Why Can't We Be Friends?"