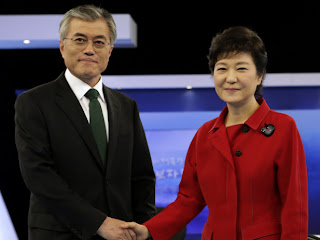 An important presidential election for South Korea will take place on December 19th. Voters will choose between Moon Jae-in (left), a former human rights lawyer, and Park Geun-hye (right), daughter of former dictator Park Chung-hee. The race is very close and is difficult to predict the outcome.  The Opposition, often fragmented, but fed up with five years under President Lee Myung-bak's draconian policies and fumblings, is united, for the first time, under a single candidacy of Moon, and is drawing additional support from younger generations. Moon was the chief of staff under former President Roh Moo-hyun and has the credentials of pro-democracy movement.

Park Keun-hae draws her main support from conservative sectors and the Kyungsang Province, whose older citizens have misguided nostalgia for the late dictator Park Chung-hee and his family.  Although Park's candidacy is seen as a pioneering effort in that this is the first viable female presidential candidacy for Korea, many question her ties to chaebul conglomerates and the dark past of South Korean authoritarianism. The new president will need to tackle the economy, welfare programs, reviving inter-Korea relations, and relations with Japan, China and the U.S., among others.