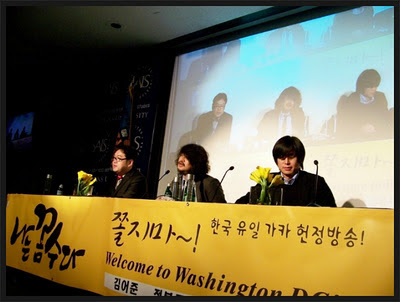 Naggomsu -- the phenomenal podcast (internet radio) team that is all the rage in South Korea these days -- is on the U.S. tour. (The photo is the event on Dec.8 in Washington, DC at the Johns Hopkins School of Advanced International Studies.) Naggomsu is made up of independent journalist, commentator, producer and a former national legislator. Its programs draws the largest audience in Korea as well as being the top downloaded podcast in iTunes.   While it specializes in humorous satire and parody of President Lee Myung-bak and his policies, it relies more on investigative journalism and keen analysis that uncover the ruling government and political party's mis-steps.

This phenomenon is noticeable and extraordinary since the mainstream Korean media has turned conservative due to media consolidations and ownership by pro-government big businesses. The effective and widespread use of alternative media and social media have energized the pro-democracy and opposition movement to a new level. No wonder the South Korean governemnt has announced that it will begin monitoring and potentially censuring expressions aired in the social media.

Attractive piece of information, I had come to know about your blog from my friend arjun, ahmedabad,i have read at least eleven posts of yours by now, and let me tell you, your website gives the best and the most interesting information. This is just the kind of information that i had been looking for, I’m already your rss reader now and I would regularly watch out for the new posts, once again hats off to you! Thanks a lot once again, Regards,
total recall 2012 colin farrell remake