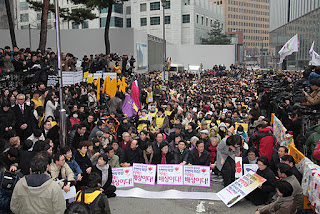 Dec. 14, 2011 marked the 1000th "Wednesday Protest" on behalf of the Korean "Comfort Women" victims -- the continuous protest every Wednesday, rain or shine, for the past 19 years in front of the Japanese embassy in Seoul, Korea. The few surviving and aging victims and their support organization (The Korean Council for the Women Drafted for Sexual Slavery by Japan) have been demanding sincere acknowledgement and apology from the Japanese government on this issue, yet no representative of the Japanese embassy has ever come out of its building over these years to acknowledge the protesters.

The silence of the Japanese authorities on this issue will not deter the protesters though, who have vowed to continue on until they pass away, if necessary. As the Japanese and South Korean governments aim to work toward a "future-oriented" relationship, the first task is to acknowledge the past, especially those painful ones that have not been adequately addressed or redressed, like the wartime "comfort women" sexual slavery issue. Solidarity protests occurred worldwide, including in front of the Japanese embassy in Washington, DC. 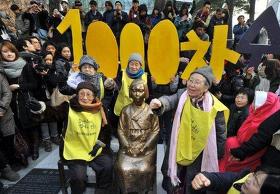 Photos are scenes from the protest in Seoul, the bottom photo shows former "comfort women" survivors at the "peace memorial" statue that was erected across from the Japanese embassy, with the likeness of young Korean girl who were forced to serve as sex slave for the Japanese military.