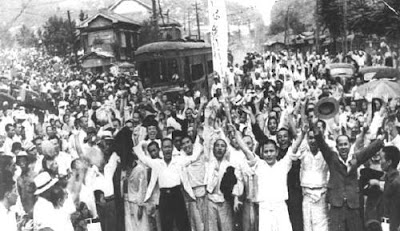 August 15th is the Liberation Day in Korea, when Koreans celebrate its independence from Japanese colonialism. But since the Allied powers (mainly the US and USSR) had strong hands in liberating Korea, the end result was the "temporary" division that led to an eventual war, prolonged division and yet-unresolved tension in Korea. One of the last surviving members of Korean independence fighters said that "the true liberation of Korea would happen when the two sides of Korea reunite."

To many, the real history of Korean division is shrouded in Cold War-era mentality and narrative, especially amongst Americans whose government had been and are deeply involved with Korean affairs (for example, how many Americans know that Korea was under direct U.S. military government for three years after the "liberation"?) Some do understand it, as expressed keenly by an American expat teaching English in South Korea.