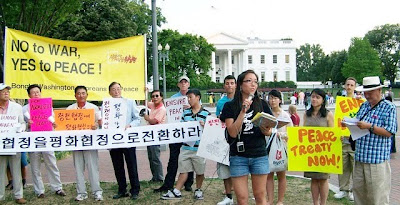 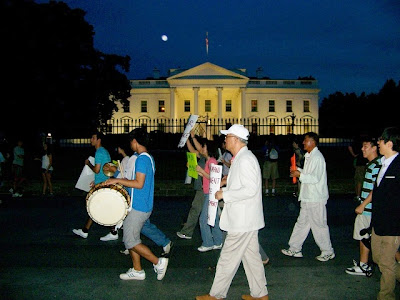 On the 58th anniversary of the signing of the Korean War Armistice on July 21, 2011, protesters -- young and old, Koreans and non-Koreans -- gathered in front of the White House to demand the signing of peace treaty to replace the temporary armistice in place to pave a way to broader peace settlement in the Korean Peninsula and to ensure lasting peace mechanism in Northeast Asia. Prior to the candlelight rally, a workshop focusing on various challenges in Northeast Asia (Korea War Armistice and Jeju naval base controversy, Okinawa base relocation issue, China and the U.S.'s role in the region) took place at the Institute for Policy Studies.

As we commemorate the 58th anniversary of the signing of the Korean War Armistice and hold a candlelight vigil in front of the White House in honor of the nameless spirits who sacrificed their lives during and since the Korean War, we also demand a permanent peace settlement on the Korean Peninsula.

On July 27, 1953, the U.S. signed (for the U.N. Command in Korea) an Armistice agreement with China and North Korea to temporarily halt the fighting that claimed 4 million lives and divided 10 million families, pending a formulation of a peace treaty. Despite the desire of people in North and South Korea for peace and reconciliation, no peace treaty has been signed since. Though China has since normalized relations with the U.S. and South Korea, the U.S. has yet to normalize relations with North Korea likewise. Sixty years after the outbreak of the Korean War, the United States continues to have a strong military presence in South Korea including 24 military bases and 28,500 military personnel. We demand that the U.S. move towards signing the peace treaty to officially end the Korean War.

The peace treaty in itself may not be enough to guarantee permanent peace in the peninsula, but it is a first logical step to take, that will aid in mutual confidence-building towards formulating a comprehensive and binding peace settlement. The previous attempts by the two sides of Korea on an inter-Korea peace agreement are good precedents for this process.

The need for a peace treaty is also a part of a larger political issue of not only bringing peace to a divided Korean peninsula but also developing a regional framework that provides a means for resolving conflicts and promoting peace in Northeast Asia. East Asia has historically been considered a dispute-ridden region in which the countries participating in the Six Party Talks (U.S., Russia, China, North Korea, South Korea, and Japan) account for nearly 65 percent of the world’s military spending. With military spending increasing in this region, there is no room for peace in East Asia nor peaceful relations between North and South Korea. We demand the end to arms build-up and arms race in the region.

I like the site. An interesting article on Korea here http://www.theruggedgent.com/2011/02/27/the-last-bastion-of-the-cold-war-understanding-a-divided-korea/

Thanks "The Rugged Gentleman" -- your blog and the article on Korea are great.