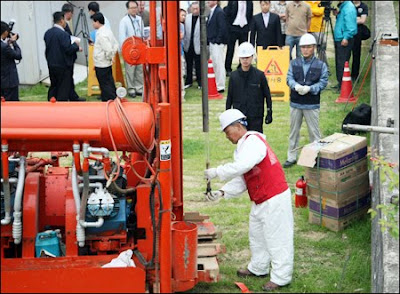 Since the revelations by former US soldiers stationed in Korea that they buried toxic defoliant Agent Orange in a US base in Korea, more and more related revelations are surfacing, making this issue a tip of an iceberg of potentially massive environmental disaster (the photo shows soil testing in the US base for possible contamination). US troops may have secretly buried the Agent Orange tanks in several base locations, and has sprayed the chemical over the DMZ near the border with North Korea to clear foliage (the Demilitarized Zone is touted as a pristine, undisturbed natural preserve, but that may be only true on the northern side as the southern side's forests have been sprayed with defoliants). In an affront to Koreans, it was revealed that the actual spraying of the dangerous chemical was done by Koreans, with US soldiers monitoring and supervising the operations from far away.

This scenario is alike the situation when US troops practiced deployment of tactical nuclear weapons in Korea prior to their removal in the early 90s. A standard war exercise involved South Korean troops carrying backpacks filled with small nuclear weapons and moving closer to the field where likely North Korean troops would have amassed, with US soldiers staying far away, holding remote controls that would detonate the nuclear bombs. It clearly showed an unequal relationship between Americans and South Koreans.

Although the US military authorities have acted quickly this time and agreed to a joint investigation with South Korean authorities, this incident will not likely quell anti-US sentiments of South Koreans, as Koreans will see US getting away with another misdeed (since the current Status of Forces Agreement [SOFA] will likely preclude any prosecution of US military wrongdoing in Korea).

﻿Amongst other steps, the management decided on Friday to relieve terminology on bailout lending products to be able to Greece, Eire in addition to Spain; maturities will be extended to 15 decades through 7German Chief executive Nicolas Sarkozy claimed methods predetermined in the summit, the fifth this Christian Louboutin Black season for the dilemma, would likely with each other decrease Greece's debts simply by Twenty-four fraction items associated with gdp coming from about A hundred and fifty pct currentlyAmong additional measures, the particular market leaders agreed on Thursday to ease words in bailout financial loans to be Jimmy Choo Sale able to Greece, Ireland in europe as well as Spain; maturities is going to be lengthy to fifteen several years through Seven"We have got consequently directed a definite signal towards the marketplaces by simply demonstrating your perseverance to help originate your problems along with turn this hold Discount Nike Shox throughout Portugal, thereby obtaining the future of the personal savings, retirement benefits and careers in our residents all over The european union," Nederlander Prime Minister Indicate Rutte claimed following ten several hours connected with tells youThe widened EFSF position is designed to protect against larger dinar area Monster Beats states like The world along with Croatia via becoming excluded coming from marketplaces as a result of anxieties of an lagging state defaulting"It definitely exhibits, inside the Eleventh hr, command in the dollar area market leaders,Inches stated Niels By, key expert on Nordea In addition, you will Monster Beats have the bond buyback schemeThe particular summit contract was based on a typical situation crafted by German born Chancellor Angela Merkel along with Sarkozy at the end of night speaks in Berlin with Saturday with ECB Chief executive Jean-Claude Trichet that the Ancient greek language bond replace Discount Air Jordan couldn't survive employed as a product for anyone a pair of nations around the worldYour widened EFSF position was designed to stop even bigger dollar area declares including The world and also France through becoming ruled out from areas as a consequence of doubts of an weakened Nike Shox Cheap nation defaulting