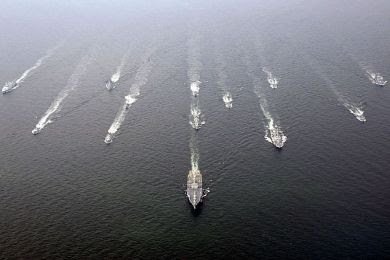 July 27 was the 57th anniversary of the Korean War Armistice, when the ceace-fire and precarious peace is still marked in absence of a peace treaty, yet the U.S. and South Korea went ahead with massive naval exercises in the East Sea during this time, much to the consternations of North Korea and China. The war games were in response to the Cheonan incident (which is still a controversial issue in South Korea), but such a military response and show of force tend to escalate tensions, rather than diffusing a volatile situation.

In Washington, peace activists mobilized during July 27th to urge US Congress and the Obama administration to seek a permanent peace settlement in the Korean Peninsula. The National Campaing to End the Korean War held a series of events in DC, and the Committee for the Implementation of the June 15 Joint Declaration for Reunification of Korea (with delegates from South Korea, Australia, Mexico, and around the US) held a forum in the US Congress on Korea's peace/security issues.

In another development, not much covered by the media, is the postponement of the wartime OPCON (operational control) transfer from the US military to the South Korean military. The long overdue transfer of OPCON, a remnant of the Korean War-era arrangement when the South Korean government voluntarily relinquished its military control to US commanders, was agreed by both governments and was to take place in 2012, but it now has been pushed back to 2015, due to insistence by the Lee Myung-bak government, with pressure from ultra-conservative forces. The delay in the transfer does not help the image of South Korea which is about to host a G-20 meeting and reveals the contradiction and oddity of an independent nation and economic powerhouse with strong military not having control of its own forces during wartime -- an arrangement that resembles a protectorate.